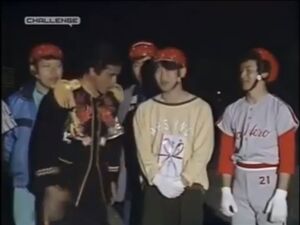 A Winner is someone who stormed Takeshi's Castle in the show down, in order to do that, a player must shoot Takeshi's dodgem on target until either a hole appears on the paper rings or when smoke appears on the dodgem. The winner gets 1 Million yen (around £6,000 today) There were 8 episodes that ended in a win, some of them were spotted by Craig Charles and some of them he didn't mainly because Takeshi's cart is close to the contestants cart and he thought Takeshi shot the contestant.

Episode 31 (UK S2 EP9, The only winner with the Takeshi doll)

Episode 9: Because the gun stabbed Takeshi's cart and not got shot by water (UK S2 EP5, Craig did say it was a winner)

In Takeshi's Castle Rebooted, General Tani said there were 9 winners altogether even though it's actually 8, I guess he included the first disqualified winner

Retrieved from "https://keshiheads.fandom.com/wiki/Winner?oldid=11537"
Community content is available under CC-BY-SA unless otherwise noted.