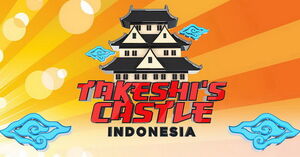 Reza Bukan plays King Takeshi - the owner of a castle, the grounds of which he fills with silly, but tough, games in an attempt to stop attacks from General Fero. To help him protect the castle, the King has a team of guards who will try and stop Fero's army progressing any further.

Each episode 'General' Fero gathers 100 contestants in an attempt to storm the castle. He wants to take ownership of the castle for himself, so leads his army of contestants through the games and onto the castle to try and overthrow the King.

The games whittle down the contestants until the last remaining few reach the final battle. In this 'Show Down' the contestants have to break the King's paper ring to win. If a player is successful in doing this they have beaten King Takeshi, stormed the castle, and won one-hundred-million rupiah.

Intro titles
Add a photo to this gallery
Retrieved from "https://keshiheads.fandom.com/wiki/Takeshi%27s_Castle_Indonesia?oldid=8366"
Community content is available under CC-BY-SA unless otherwise noted.