Start a Wiki
In the pilot episode Count Takeshi becomes the General and General Tani becomes the Count. This episode has currently been unaired in other countries and only aired once in Japan. 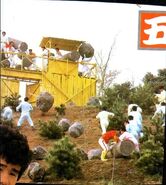 Add a photo to this gallery

Retrieved from "https://keshiheads.fandom.com/wiki/Pilot_Episode?oldid=11518"
Community content is available under CC-BY-SA unless otherwise noted.